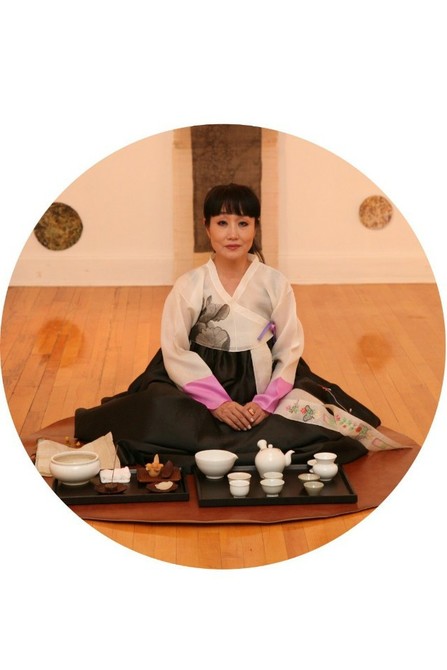 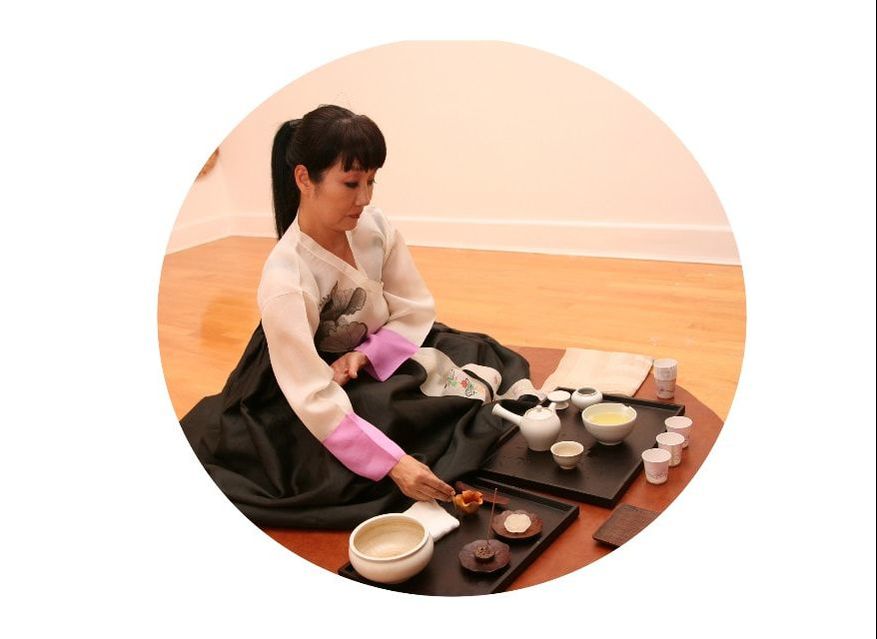 2022
Tea Ceremony at Korean in Philly 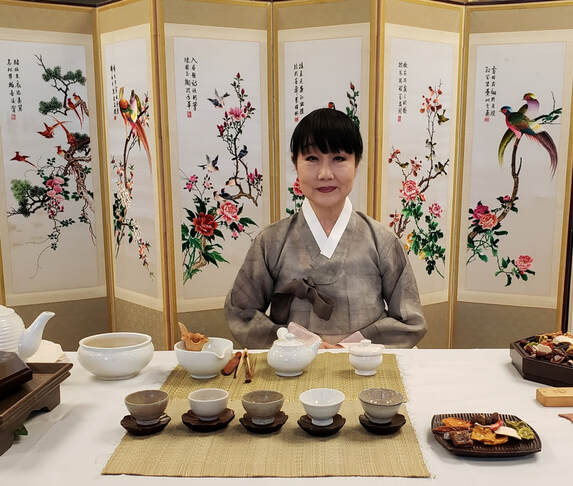 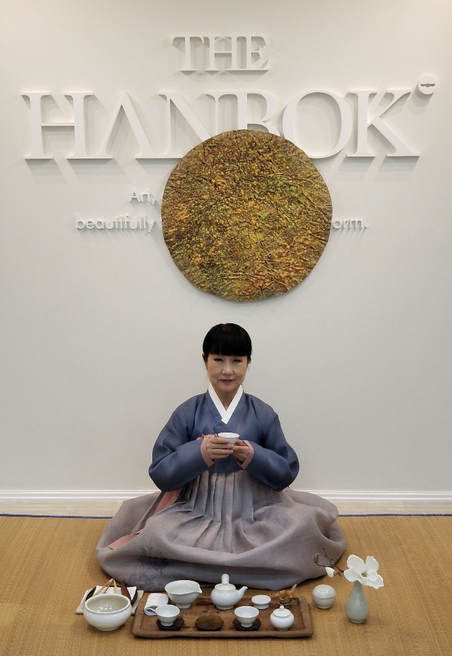 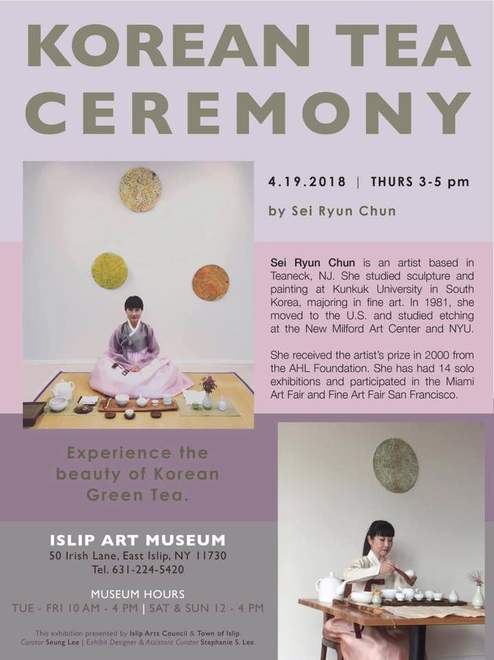 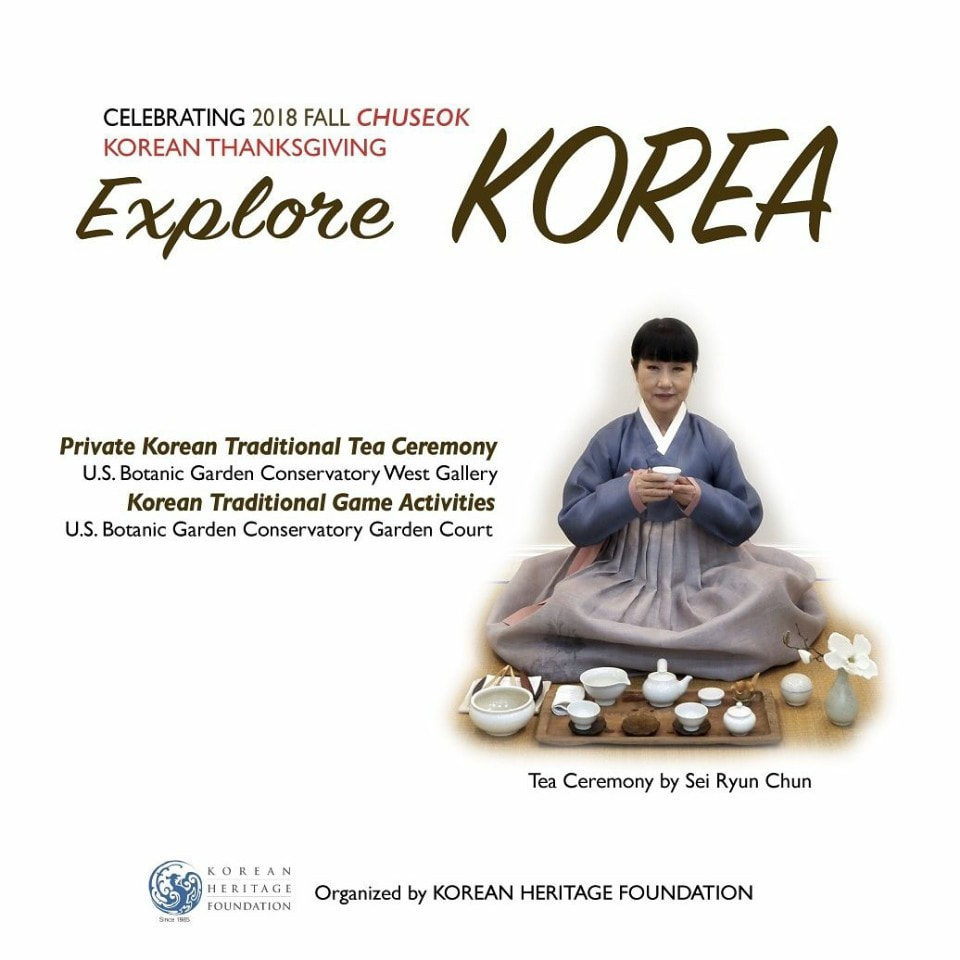 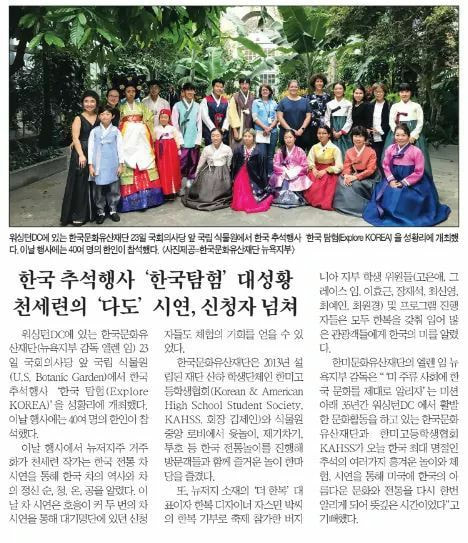 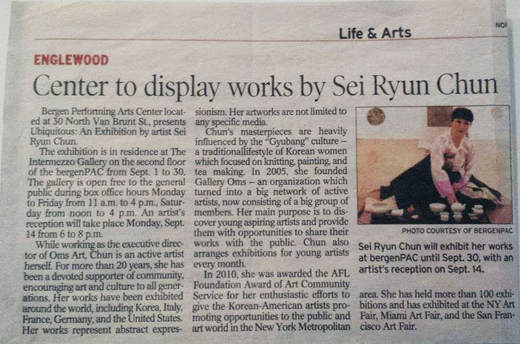 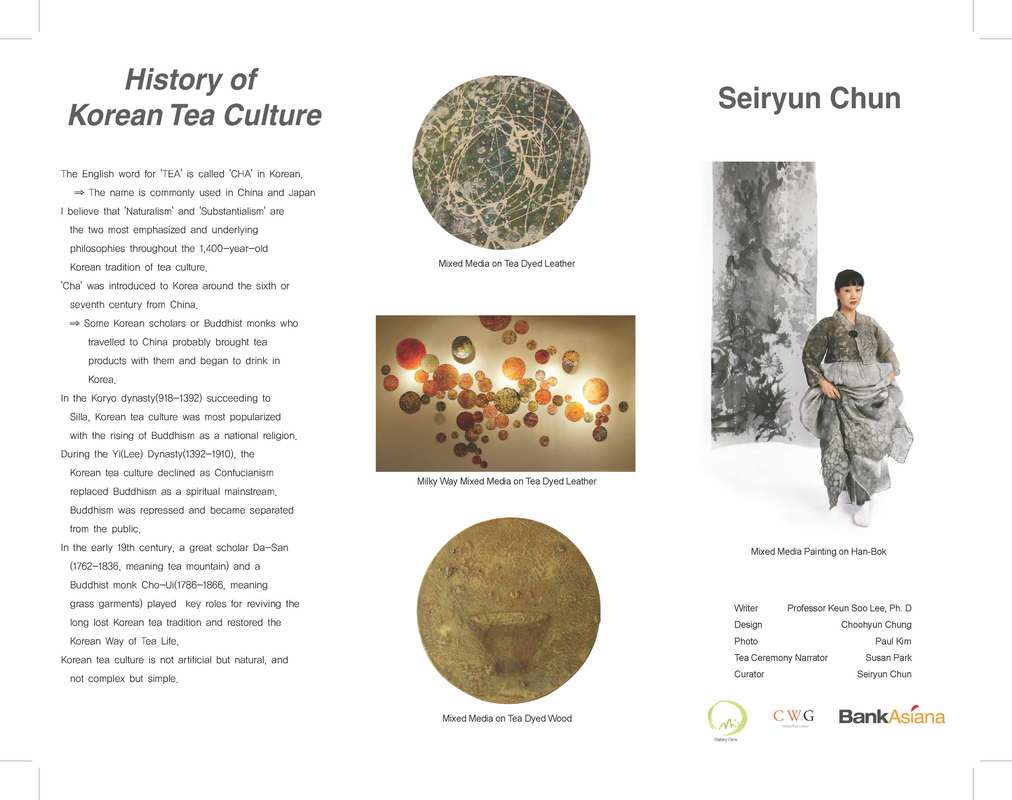 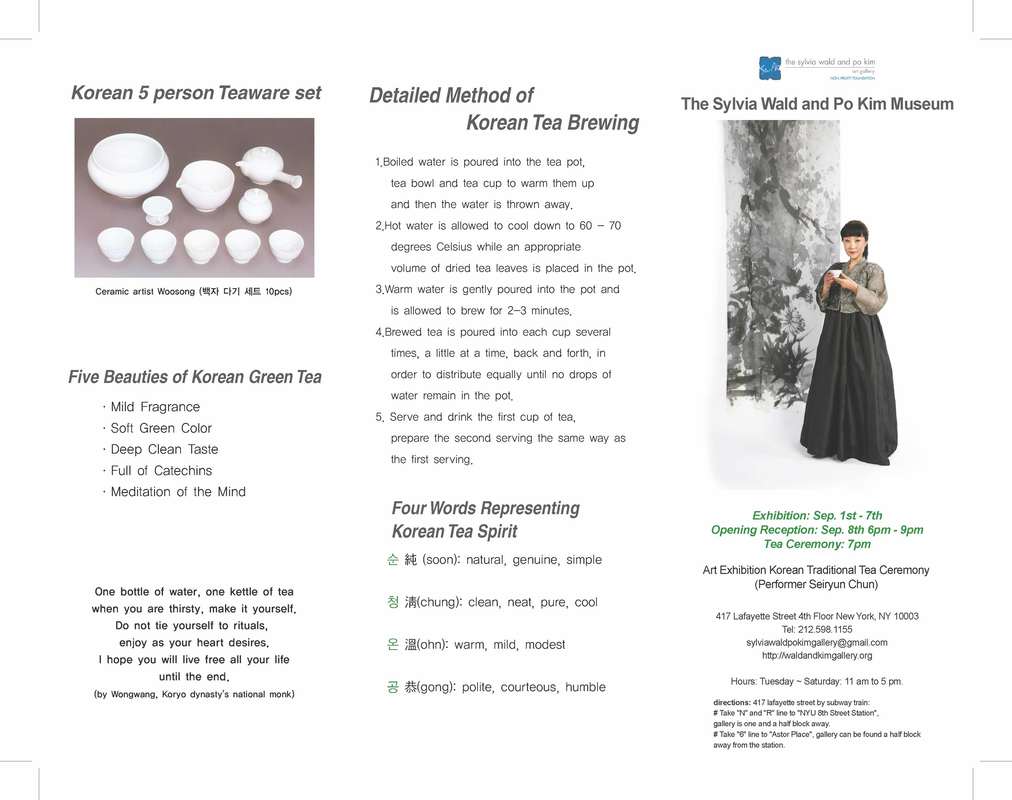 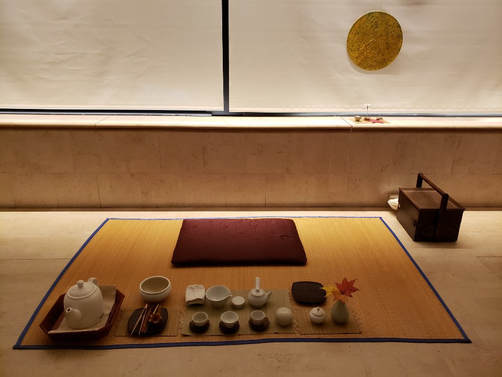 CRS (Center for Remembering & Sharing) presents 7 word chanting Yeongsanhoesang 靈山會相, featuring Korean traditional music performed by gamin (piri, saenghwang) and Min Kyung Park  (haegeum) accompanied by a tea ceremony performed by Korean tea master Sei-Ryun Chun. Following the performance, there will be a short talk about Korean tea ceremony and Q&A with the artists.
For this event, which is Vol. 3 of the Crossing Boundaries — Echoes of Korea — Concert Series curated by gamin, she would like to introduce the Korean concept of Pungnyu, which is defined as an artistic form of recreation incorporating elements of nature, life, and art. Pungnyu is intrinsic to a tasteful lifestyle and to Koreans’ collective and individual entertainment culture. It literally means “streams of wind.” Sharing tea, playing music, writing, and observing the changing of the seasons are traditional pastimes used for transcending the material or secular aspects of life and cultivating a peaceful mind. Participating in a tea ceremony quiets the mind and opens the senses, allowing us to experience more of the subtlety and depth of the music performance.
Both the music and tea ceremony presented in this program have been handed down to us from medieval Buddhist practices. As Buddhism in Korea fell in and out of favor through the centuries, both the music and the tea ceremony were frequently revised to serve the times. Artists today continue to find ways to explore and extend these traditional art forms in ways that speak to the present moment and connect us not only to our heritage but to one another.
Tickets are $25 and are available online, by phone (212-677-8621), and at CRS. Students/seniors with valid ID are $15 at the door.
CROSSING BOUNDARIES — ECHOES OF KOREA, curated by gamin (piri, taepyeonso, saenghwang), provides musicians from Korea with space to experiment with the new, to collaborate across genres, cultures and disciplines, and to explore new ways of using creative communication to facilitate a shared practice of presence. The goal is to dissolve boundaries between performers and audiences, the traditional and contemporary, classical and experimental, Korea and the world. Participants in the series are encouraged to incorporate meditation, improvisation, and collaborations with visual and movement-based artists as well as musical artists from different traditions.
About the Program
Tea ceremony by Sei-Ryun Chun
Piri & saenghwang played by gamin
Haegeum played by Min Kyung Park
Originally a vocal piece with lyrics drawing on the words of the Buddha’s sermon in Mount Yeongsan, India, Yeongsanhoesang became purely instrumental in the 15th century. The music has undergone continuous change with the current version taking form sometime in the 19th century. There are many versions of the suite, which typically includes 8–9 pieces. While the genesis of the suite is not completely certain, the first piece of the suite, “Sangryeongsan” appears to be the foundation for the suite. The following pieces in the suite include variations on “Sangryeongsan,” as well as standard musical forms and dance pieces of the Joseon era (1392-1910). “Sangryeongsan,” the slowest and longest piece in the suite, progresses gracefully and gently like the flow of water.
The Korean tea ceremony is distinguished by its emphasis on preparing and enjoying tea with a natural manner and minimum of ritualized formality. Originally, it was directly connected with Buddhist practices, but today it can be enjoyed by everyone. Cha (tea) was introduced to Korea around the 6th or 7th century from China. Some Korean scholars or Buddhist monks who traveled to China probably brought tea with them and began to drink in Korea. In the Goryeo dynasty (918-1392), Korean tea culture became popular with the rise of Buddhism as a national religion. During the Joseon Dynasty (1392-1910), the Korean tea culture declined as Confucianism replaced Buddhism as a spiritual mainstream. Buddhism was repressed and became separated from the public. In the early 19th century, a leading Korean philosopher, Dasan Jeong Yakyong (1762-1836), and the Korean Buddhist Seon (Zen) master Chou Uisun (1786-1866), known as the “Father of Korean Tea,” played key roles in reviving the long lost Korean tea tradition, which continues today.

About the Artists
Tea master Sei Ryun Chun was born in Busan, Korea in 1956 and grew up in an artistic family. Majoring in fine art at Kunkuk University in 1979, she studied sculpture and painting. After graduation, she taught at Shinjung middle and high schools. In 1981, she moved to America and studied etching at the New Milford Art Center in New Jersey and New York University in New York. She has also written extensively about art. She received the AHL Foundation artist’s prize in 2000. She has had 14 solo exhibitions and participated in the Miami Art Fair and Fine Art Fair San Francisco. She has been curating exhibitions in New York and New Jersey. She is currently incorporating her mastery of the traditional Korean tea ceremony into her exhibitions and presentations. seiryunchun.com

​Gamin is a master practitioner of the piri, taepyongso (double reed instruments), and saenghwang (reed mouth organ). Currently, as a yisuja(designated master) of the Important Intangible Cultural Asset No.46 for piri court music and Daechita, she strives to both preserve and enhance traditional Korean music. At Seoul National University and as a member and assistant principal player of the Contemporary Gugak Orchestra, Gamin has used her virtuosity to perform authentic jeongak (classical court music) and sinawi (shaman ritual music), as well as new compositions for her instruments. gamin-music.com
Haegeum instrumentalist Minkyung Park is a recipient of the 67th Chosun Daily Debut Concert and was selected as 2006 Kumho Young Artist by Kumho Asiana Foundation for Arts and Culture, which discovers and supports nationally talented instrumentalists. She has performed at many prestigious venues internationally including ‘tea music – longing for friends’ in NYC, combining art performance with harmonization of various genre of music and arts. She received a B.S. and M.S in Korean Music from Seoul National University and completed a D.M.A course at Hanyang University. parkminkyung.com