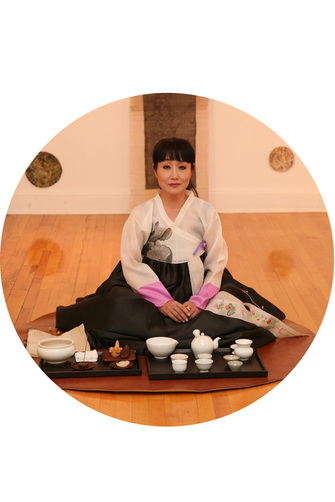 ​While working as the executive director of Oms Art, Sei Ryun Chun is an active artist herself.
For over twenty years, she has been a devoted supporter of community, encouraging art and culture to all generations.
Her works have been exhibited around the world, including Korea, Italy, France, Germany, and the United States.
Her works represent abstract expressionism. Her artworks are not limited to any specific media.
Sei's works are heavily influenced by the "Gyubang" culture - a traditional lifestyle of Korean women which focused on
knitting, painting, and tea making.

Sei was the very first person to open a Traditional Korean Green Tea House in Old Tappan, NJ in 2004.
In 2005, she founded Gallery Oms-- an organization which turned into a big network of active artists, now consisting of a
big group of members. Her main purpose is to discover young aspiring artists and provide them with opportunities
to share their works in the public.  She has been, and still is, arranging exhibitions for young artists every month.

In 2010, she was awarded the AFL Foundation Award of Art Community Service for her enthusiastic efforts to give the
Korean-American artists promoting opportunities to the public and art world in the New York Metropolitan area.
Sei has held over a hundred exhibitions and has successfully exhibited at the NY Art Fair, Miami Art Fair, and the SF Art Fair.
Education